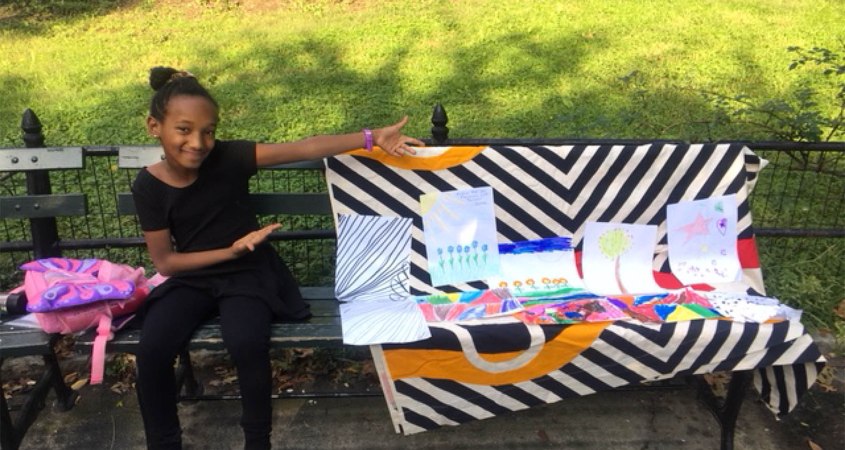 Admittedly, I tried to talk Julia out of her mission. Day and night. For three weeks. But as any parent can tell you, talking an eight-year-old out of what they consider to be their mission is a hard lift.

“But mommy, I really want to sell my artwork outside of our building!”

“I’m not sure that’s possible,” I said and kept saying. “I’m sure I’ll have to get permission.”

(New York City condos and co-ops are funny that way.)

But the greater truth was this: I didn’t want to go out in the world and sale anything.

To be clear, it wasn’t that I thought my daughter’s artwork was lousy.  I just didn’t want to sit in front of my building beside a child with a hungry look in her eyes, pimping paintings. Granted Julia’s plan could yield her vital confidence building skills.  Still.

But then came a bright beautiful Sunday. We head to church, for the first time since June when Sunday school classes went on summer hiatus. I heard a nice, motivational talk. We had a nice brunch with Aunt Carmen, and another church friend, at Regional, our favorite eatery. Mommy had a mimosa or three. The golden sunlight was lovely against the cobalt blue day, perhaps last warm Sunday of September if my memory holds. So, after Julia said our goodbyes and we headed home. As a warm breeze whirled around us, and Julia’s braids bounced in the wind, I turned to her and said,  “Let’s go to the park and sell your art work…”

“Yippee!” Julia yodeled and ran into down the block and into our building.

“Where is she going so fast?” the doorman said.

“To get her artwork.”

While Julia retrieved her portfolio, I headed to the sideboard and pulled out a colorful tablecloth to use as a backdrop for her work, my second halfway decent idea. Then I grabbed my tote bag, a glass jar, bottles of water and my courage.

“How about we set up at the entrance of Central Park? Where there’s lots of foot traffic…”

I fluttered the bold patterned tablecloth over an emerald-green bench. Julia placed her work in two neat rows.

I sat down and said a prayer in hope things would land on the plus side: “Please God please let her sale at least one drawing and keep people from being mean to my kid.”

Within a minute or two an older man behind a sturdy walker came to a stop in front of the display and asked, “What are you raising money for?

“The homeless… we’re giving part of our proceeds to the homeless.”

“Well, I don’t want a drawing but I’ll make a donation,” he said.

And with that he flipped open his wallet, pealed out two-dollar bills and placed them into her tiny hands.

Julia’s eyes widen. A stranger had just handed her cold hard cash, “Thank you!” Julia said then stuffed the bills into a glass mason jar that we’d brought for the occasion.

Well, maybe this won’t be so bad.

As soon as I released that thought, like a ball player who acknowledges a hitting streak, we fell into a dry spell. A long parade of dog walkers hustling their four-foot-footed chargers, and stroller’ moms who cast down disparaging looks that read thusly, “Why would I buy the same crap from your kid that’s on my fridge!”

Julia was crestfallen. “Mommy, nobody’s stopping,” she moaned.
“But I told you not everybody is into art, some people walk with headphones on, and some people are in a hurry.”

“Mama, let’s get up and walk around with the park with the pictures…”

“Nooooooo.” I said and started yodeling, “Artwork for sale!”

Julia joined in, “Get some art work!”
A pale guy, with neat-cropped hair, slowed his roll down the path, and pointed to a flower drawing. “How much is this one?” 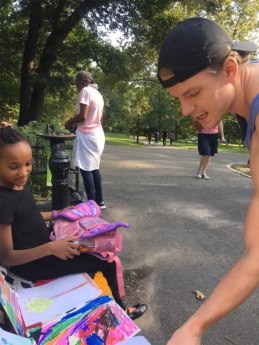 “Yes…”
“A dollar…” Julia said.
“A bargain!” he said, his hand dove into his pocket, pulled out a buck, and placed it into Julia’s palm.
“My fiancé loves sunflowers.  And she’s on tour right now…this’ll be a nice welcome home present.”
Julia beamed.

An older woman came out of nowhere, picked up a blue painting and said, “I’ll take this one …and I’ll make you my princess of water. I love what you’re doing.”

Julia was back in business.  About this time, I noticed the extended sound of water coming from a nearby fountain. There stood a woman, slim and brown- skinned, holding an object that she ran an under the low, arched stream. She rinsed and swished the water over the cloth. Then she twisted the water out, and tucked the cloth into her pocket.
Maybe she got ice cream or something on her clothes, I thought.

But she welded an urgency in her movements, focused and tight.  I didn’t think much about the piece of cloth, until she pulled another item out of her pocket, until she started running it under the water.

I read once that objects under a microscope when observed moved differently. A testament to the energy of observation. Once she noticed me noticing her, the energy around us shifted. Like her moves, the air became tight. She turned her head towards me but kept her hands moving and scrubbing and twisting, and said flatly and clearly, “I’m sorry I have to do this here.”

Do this? Do what?

Then all the details like a paint by number canvass filled in.

She’s washing her clothes in the water fountain.

A blinked at the sight, almost unbearable to take it in. Like a super nova, it hurt my eyes.
Maybe I should pack up and move… I don’t want Julia to see.

Then a new thought dawned, as bright and opulent as the day, and just as undeniable.
Well, we said we were going to give money to the homeless.  And there’s a homeless person. Our giving just became easier.

“Let me see that jar, Julia. 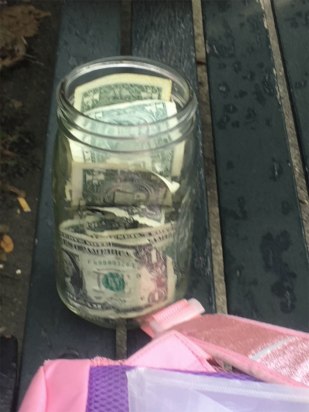 It held, maybe eight dollars. I pulled out four.

“Go give this to that lady, Julia.”

She tepidly walked over to her…and announced “Here….”

The woman extended a wet, soggy hand,
took the cash and tucked it under her shirt, into what I could assumed was her bra. “Thank you,” she whispered.

I watched the scene, the girl giver, the receiver lady, in a matter-of-fact-stunned silence. This day was going its own way.

“You’re lucky that your mom and supports your art,” I heard a male voice say. I turned and saw a tall, lanky dreaded guy with warm brown eyes standing over the assortment. “My mom didn’t support me and I’m still an artist.”

He was a man but I could still see the little boy hurt in his eyes. The cute girl beside him angled her head up towards him and smiled. I hadn’t seen a woman look at a man with such love in her eyes in a long while.

Until that moment I didn’t realize how much trying to give your child their hopes and dreams, really served as an on ramp to solving the mysteries of your childhood. I thought of how my mom managed my regular excursions to the Detroit Institute of Arts from our Westside home, once I fell in love with the mural by Diego Rivera in the 3rd grade. In my freshman year of art college school, when I invited her to go to the museum to see a show did I learn something new about my mom. “No, thanks,” she said. “I hate the museum”

“Then why did we go so often?” I asked shocked at her omission.

“Because you wanted to go.”

“You’ve got a great mom,” the girl with the loving eyes said, cradling a drawing.

I have a great mom, too. I thought. She exposed me to the act of art that freed me art but as a child selling goods had crushed me. As a kid, I was petrified of selling Girl Scout cookies. Annually, my troop called upon every girl during the cold hard months of February to meet a specific dollar amount by selling sweets. That way every girl could attend camp regardless of her family’s economic status. My stomach started knotting up in January.

After selling cookies to my neighbors, and my immediate family, my proceeds of 30 or so dollars still fell far short of the goal. Still, no matter how much my parents hounded me, I refused to pimp anymore cookies.  Just couldn’t do it. The humiliation. The hawking. Aggh. In the end, every year around March, my father wrote a check and gave it to the Troop leader. My family and I ate from the cases that lined the walls of the dining room for until it became shorts weather again.
So, as Julia plotted to sell her work, my childhood traumas blazed back. Fear that people would be mean to my kid. Or even worse, fear that they would dismiss her efforts. Dismiss her. I hadn’t known it until I sat on the faded green bench just how much I feared having Julia out in the world, feared her laying it all out there.

As a creative person, I do it all the time. But frequently a cocktail comes at the end of a particuluar bad mission. In grad school, during one tough season, if I received notes back on my writing in the morning, I’d hold off my review until the end of the day. So, I could crack open a Cabernet, and read with a glass of comfort.

As Julia expanded the territory of her sense of self through her creative efforts and shared them with the world, I had to sit there and bear witness to it, a sort of reverse art therapy that left me in a stunned-silence. In that moment, the realization hit of all the beauty I would’ve missed by refusing to let go of the past.

“I’ll take that colorful one,” a man with crown of curly hair said, “You’re quite the artist. It matches my tattoo.”

“Look how much money I have Mommy!”

The mason jar was fully a vibrant green.

“That’s great Julia, let’s go give some more money to that homeless lady.”

We looked towards the fountain. And then down the path that led deeper into the park. She’d vanished.

“I see her down the street!” Julia said.

We gathered the remaining drawings, the tablecloth, glass jar and ran out of the park then down the street.

We thundered up to her. She jumped back on the bench, a little startled.

“Hey, I bought lunch meat and cupcakes with the money you gave me…” she said, almost as if she felt she had to report to us what was purchased with the cash we’d given her.

“That’s great, here’s some more,” I said, pressing dollars into her hands.

She smiled at us, her thin face seemed to fill in a bit, maybe it was the light of being seen, fully seen by another human being, not stepped over, ignored. Then she pointed that gleam at Julia.  “Would you like a cupcake?” she said.

The writer Paolo Bacigalupi once said, “I’m particularly interested in black swan events: unprecedented surprises that destroy the conventional wisdom about how the world works.”

Through Julia I’d experienced my first black swan in a long while. All the beauty and kindness of the day, I nearly missed, delivered by the bravery of an eight-year-old. And as Julia put her hand in mine, and we headed home, I felt the burn of salt across my eyes, a wash that threatened to appear, but I kept at bay, at least until we reached home.